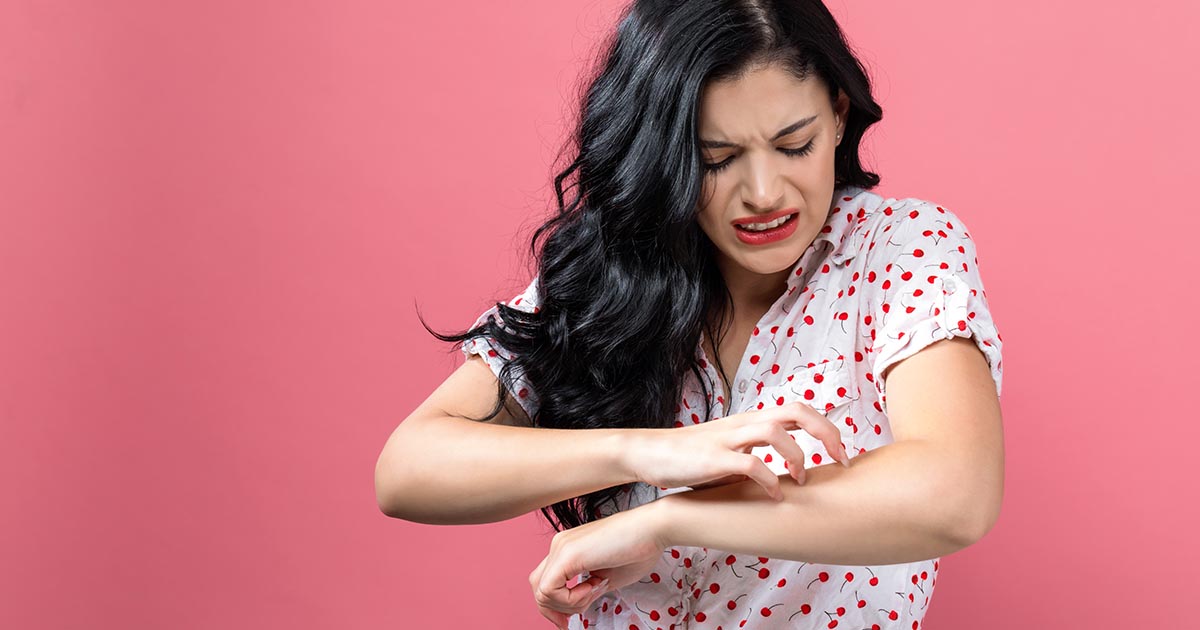 Eczema is one of the more common dermatological afflictions people face. But, anyone who lives with the raised, itchy, swollen rash that eczema causes will agree that even though it's not rare, it's certainly not pleasant.

There are as many purported causes of eczema as there are purported treatments. However, many of the causes people point to are not entirely accurate, misinformed, or downright wrong. The same extends to the treatments, few of which are effective at all.

Eczema (notably the most common type, atopic dermatitis) is a relatively mysterious condition. Doctors don't know the specific causes of it, although they are aware of some influencing factors. Recent studies have begun the process of demystifying it, but much remains a mystery.

While visually, eczema is reminiscent of an allergic reaction, eczema is not explicitly caused by allergy-like other skin conditions. While dozens of external factors can trigger it, they are not universal in their impact, which makes it difficult to point to any single one as a cause.

In order to manage your eczema effectively, it's important to know what causes and triggers it. Here's what you need to know about some common eczema causes, as well as some perceived causes.

Of all the candidates for eczema causes, genetic predisposition is the most likely, and widely accepted as the one true "cause" of eczema. While there are numerous triggers which may cause flare-ups or worsen an existing rash, to have eczema manifest almost certainly requires the right (or wrong, in this case) gene.

While genetics has been the prime suspect for eczema for quite some time, compelling evidence wasn't produced conclusively until as late as 2017. As published in the medical journal Nature Genetics, atopic dermatitis eczema is linked to a genetic mutation. Called CARD11, the gene was found to have mutated in eight people from the four families studied, and linked to their eczema.

It's a relative certainty at this point that genes play a role in the appearance and persistence of eczema. However, while that may be at the root of the issue, there are also environmental triggers which (in tandem with a genetic predisposition) can cause an eczema flare-up in those prone to them.

One other proposed and likely cause for eczema is an autoimmune response. In another study published in 2014, Doctors were able to successfully treat eczema with immune-suppressing drugs, creating a strong link between an immune system overreaction and an eczema outbreak. Of course, suppressing the entire immune system to treat a rash does seem like a rather extreme solution to a problem, but it does shed some light on the root mechanisms.

In the study, the researchers noted that two immune system proteins, designed to fight off harmful viruses, were instead turning on the body itself and causing an eczema reaction. By suppressing the activation of these proteins, scientists were able to control the test subjects' eczema simultaneously.

Before this study, it was noted that immunosuppressant drugs would help control eczema, but there was no understanding of exactly why. And of course, suppressing the entire immune system has the negative effect of making a patient more susceptible to communicable illness. With the latest breakthrough, hopefully, more targeted solutions will be able to provide treatment, without as much potential for negative consequences.

Gaps in the Protective Skin Barrier

The skin on our bodies acts as a shield of sorts, keeping undesirable microbes out, and keeping required moisture in. But for people with eczema, the skin barrier that most people come to rely on isn't functioning as it should be.

In people with eczema, some research has indicated that a genetic mutation has also caused a reduction in the production of the protein "Filaggrin," which helps build the aforementioned protective barrier. Filaggrin helps to regulate the in and outtake of moisture to maintain consistently hydrated skin. In those with eczema, the function of filaggrin is reduced, and skin becomes compromised.

Once genes and immune systems have been taken into account, the compromised skin barrier of someone with eczema should be viewed as a cause, because unlike genetics, there are treatments available to help improve this. Also, unlike expensive immunosuppressants, this form of treatment can be as simple as regularly applying a good moisturizer.

As anyone affected by eczema would tell you, a good moisturizer is one of the most powerful weapons against a flare-up. Keeping skin moisturized can act as a replacement for filaggrin and be both an effective preventative measure, and a solid treatment in the event a flare-up occurs.

Without the underpinning genetic predilection, it's highly unlikely to develop eczema, even when exposed to outside factors. Some people might not even know they are susceptible to a flare-up unless exposed to the trigger, effectively making it a "cause" as far as they're concerned.

Environmental factors that can trigger eczema are far-ranging, varied, and affect everyone differently. While some may cause a nasty outbreak in one person, it might not affect a different eczema sufferer at all. Here's a list of some of the most common:

There's very little you can do about having a genetic predisposition towards eczema. However, avoiding environmental triggers can be a lot more manageable and should be considered as part of an effective treatment plan.

While avoiding irritants like caustic soap might be doable, it's pretty hard to escape the climate you live in and the weather it brings. And, because weather and temperature play a large role in how eczema impacts you, it should be considered as its own separate cause.

People living with eczema know the importance of keeping the skin clean and controlling its moisture. This becomes a far greater challenge when it's hot out, particularly when exercising. Sweat can cause excess moisture that can act as an irritant and cause an outbreak, if not dealt with promptly.

Additionally, some affected by eczema describe a "prickly heat" and itching when their body temperature rises -- easy to achieve when living an active life in the summertime or warmer climates. This prickly heat generally acts as a precursor to a flare-up.

In hot weather, it's important to wear breathable fabrics that serve to keep you cool and dry. If you do develop a lot of sweat through activity or otherwise, it's smart to shower as soon as you're able to. Showering will help to keep your skin clean and lower your body heat.

Cold weather has the opposite effect of hot, but can be just as bad for causing an eczema outbreak. Instead of an excess of moisture, cold can cause dryness, chapping, and cracked skin, all of which invite an eczema flare-up.

Where hot weather requires breathable clothing and dry skin, cold weather means you should seek to avoid exposing your skin to the elements. Keeping well bundled when it's cold, dry and windy will help limit the damage your skin could suffer.

And where dryness is your friend in hot weather, cold weather begs the use of a moisturizer. Well known as an effective treatment for eczema whatever the season, using moisturizer (especially on areas exposed to the cold) will help mitigate the potential for an outbreak.

Misconceptions About the Causes of Eczema

It would be impossible to write an article about the causes of eczema without including a list of myths about what people erroneously believe causes it. The exact mechanisms that cause people to experience this skin condition went unknown and under-explained for so long, people concocted their own reasons for its appearance – many of which are inaccurate. Here are a few misconceptions about the causes of eczema to consider:

You May Also Like:Understanding What Facial Eczema Is
Related Search Topics (Ads):

Eczema has a genetic connection; there's little argument about that anymore. But like most genetic-based conditions, having a family member (even an immediate relative like a mother or father) with eczema does not guarantee you will contract it. The right confluence of genetic factors needs to take place, and a simple relative connection may be insufficient for you to display eczema symptoms.

Everyone knows stress (at least over an extended period of time) isn't healthy for you. Everything from sleep deprivation to digestive issues can trace their roots back to an unhealthily stressful environment.

However, stress cannot cause eczema – if you don't have it, being stressed out won't cause it to develop.

That said, as I mentioned above in the environmental factors section, stress can trigger and worsen flare-ups in those already dealing with the condition, so it's best avoided regardless.

This one may fall under the "trigger" classification rather than a cause, but some believe swimming in chlorinated pools can cause an eczema outbreak.

If the pool is untreated and filled with bacteria, it is possible – but more likely than not, a properly maintained pool will help kill excess bacteria on your skin, reducing the chance of a rash.

Additionally, as mentioned above, a spike in body temperature increases the likelihood of an eczema appearance, so feel free to take a plunge and keep cool in the pool.

Some believe people that if you've had eczema at one point in your life, even as a baby, you're bound to have it as an adult. While this isn't a wild idea, eczema is much more common in infants than it is in adults.

A consistent application of moisturizer on babies with eczema can clear it up – permanently. So if your baby does have signs of eczema, take appropriate action and don't count on it being an issue into adulthood.

There is only one definite cause for eczema, and that is possessing the right genetic conditions for it to appear. But even if those conditions are just right, there are a confluence of factors that impact its development.

Immunity is a big one, and one of the most treatable causes of eczema. An overactive immune system that attacks you is a recently identified trigger for an eczema outbreak. As scientists continue to refine the exact reasons for this, better drugs and treatments will become available without compromising your immune system entirely, leaving you susceptible to other illnesses.

A breakdown in your skin barrier and a mutation of the protein called filaggrin, which manages moisture levels and keeps out bacteria is another cause. By manually managing your skin's hydration with moisturizers, you can seek to subvert this cause. This is especially important during hot and cold weather, where external factors can impact your skin's function and trigger eczema.

And while environmental factors are often touted as true "causes" of eczema, they are more like triggers for it. Avoiding skin irritants and allergens is a good step to managing your eczema. And while stress and the other myths above don't cause eczema, it's best to avoid stress anyways for a variety of reasons, including its potential as an eczema trigger.

The first step to managing your skin condition is understanding the root causes for it. Hopefully, armed with this information, you'll be able to maintain your skin's health and your own comfort better.

Cameron Smith
Cam is a professional content specialist and hobbyist blogger with a passion for writing, travel, and wellness. He has a passion for educating others about eczema and its management, as he has lived with it since his very early youth, and was often at a loss for reliable online resources to help with it. See all of Cameron's articles
More Articles by Cameron
Resources
Print This